New time trial suit to provide a margin of seconds

A closer look at the 3D-printed mannequin of Tom Dumoulin in the TU Delft wind tunnel
During the big Tour de France time trial on the 15th of July, Tom Dumoulin will be cycling in a new suit, developed jointly by Team Giant-Alpecin and the TU Delft. The university used a peculiar method during the investigation of the aerodynamics of the suit: Dumoulin’s body was first scanned, after which a 3D-mannequin of his body was printed. The drag of this mannequin – each time with a different suit – was then tested and optimised in the Delft’ wind tunnel.

One of the areas for professional cyclists to still stand out is (even) better aerodynamics. This is partly determined by the cyclist’s posture on the bike, but an even more streamlined outfit can also aid to this. Reason enough for Team Giant-Alpecin to collaborate with scientists of the TU Delft on developing an improved cycling suit. ‘During cycling – and especially during a time trial – it’s all a matter of seconds; so even if a faster suit can only deliver a small improvement, this can make a huge difference’, according to Tom Dumoulin. The difference between Tom Dumoulin and the runner-up in the prologue of the Giro d’Italia was indeed a mere 14-hundreth of a second.

Scientifically speaking, you’d ideally have unlimited access to the athlete, in order to conduct extensive win tunnel tests and develop the perfect suit for them specifically. However, you can’t place a professional cyclist in a wind tunnel for weeks on end. The consequent idea, developed at the TU Delft, was to not place the cyclist himself, in this case Tom Dumoulin, in the wind tunnel, but a mannequin with the exact same physical measurements. An even more important upside to the use of a mannequin in the wind tunnel: it remains perfectly still, making the measurements of the airflows around the body much quicker and more accurate.

The project is aimed at the time trial outfit for Tom Dumoulin, one of the best time trial cyclists in the world. The new and improved suit will be used during the big time trial on the 15th of July in the Tour de France. ‘Several steps were taken to make the suit more aerodynamic. First, the body of Dumoulin was accurately scanned. Afterwards, using this data, a precise, full-size mannequin of his body was 3D-printed. This mannequin was then used to take measurements on different suits and materials in the TU Delft wind tunnel’ explains Dr. Daan Bregman of the TU Delft Sports Engineering Institute.

Dr. Jouke Verlinden of the the Faculty of Industrial Design Engineering at the TU Delft was mainly concerned with developing a good mannequin. ‘Step 1 in this process is the accurate scanning of the cyclist. We outsourced this task to a specialised company (th3rd), who use a photogrammetric method. In short, we used 150 DSLR cameras to take many pictures of the body from many different angles, all at the same time. Tom Dumoulin was done in 30 minutes or so, but for us, the work had only just started.’

‘As a resulted of all those digital images, we were left with huge amount of data. It’s key to use the data correctly, for example by splitting up the files in a smart way; the so-called 3D-segmenting. One should also determine where the accuracy of the scan and the resulting print is somewhat less important. On those areas you can strongly reduce the amount of necessary data. If you aim to make a model that is accurate to the micrometre throughout, you’ll end up spending way too much time printing the mannequin.’ 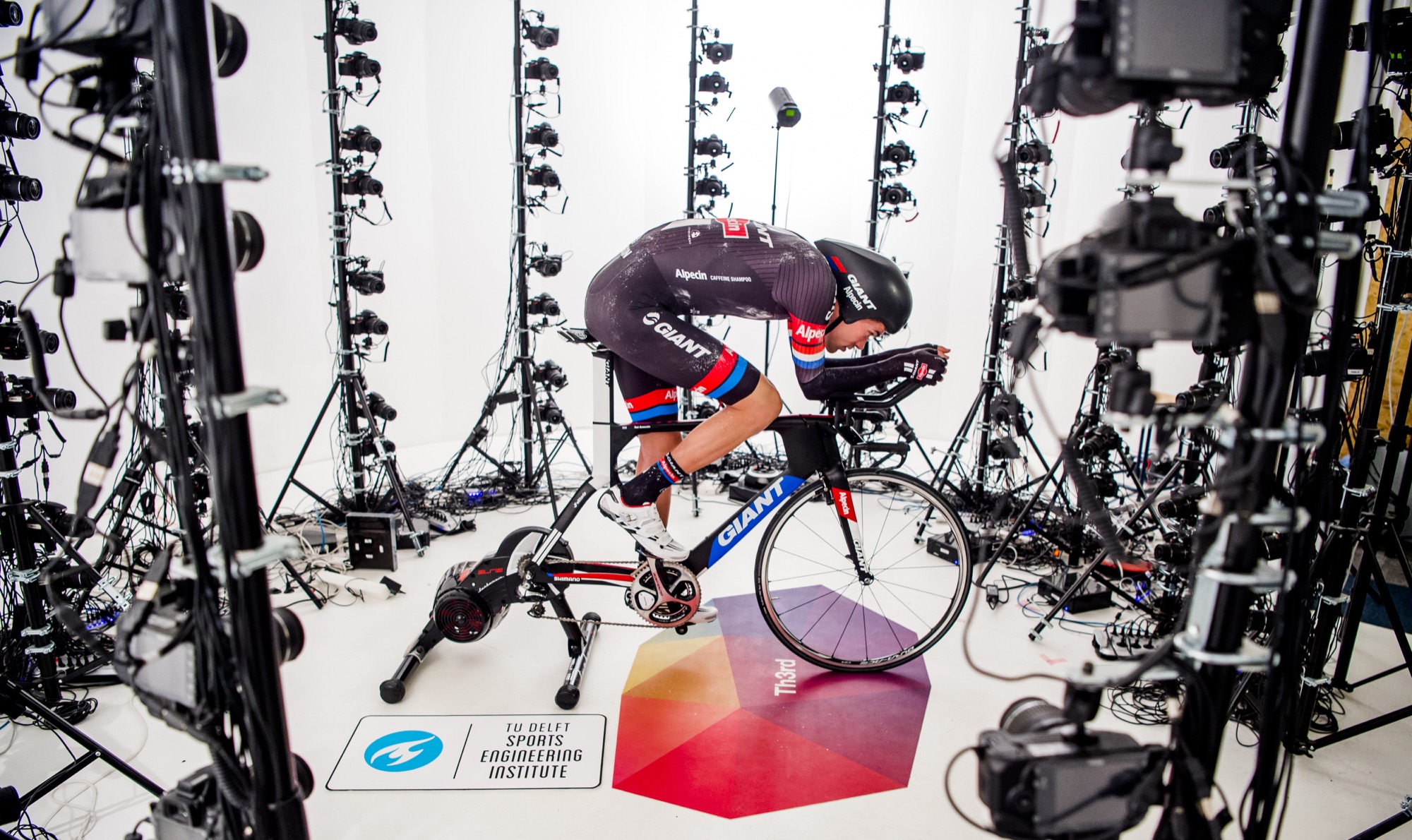 The next step in the process is building the mannequin – for which 3D-printing was chosen. ‘3D-printing is getting increasingly accurate and cheap and thus more attainable. We actually use a fairly standard 3D-printer, albeit one that can print relatively quickly. Through a relatively simple adjustment, the printer can now reach up to 2 metres high. It took us about 50 hours to print the mannequin, up to 20 micrometres precise.

The method we used is call Fused Deposition Modelling, in which the model is built up in plastic layer-by-layer.’

‘Moreover, we printed the mannequin in eight separate parts, using multiple printers at a time. You must not forget that the parts should be able to move with respect to each other to get the mannequin on the bike in a realistic posture. And of course, it must also be possible to dress up the mannequin in a new suit. The eight parts are attached to one another via simple pin-hole joints.’ 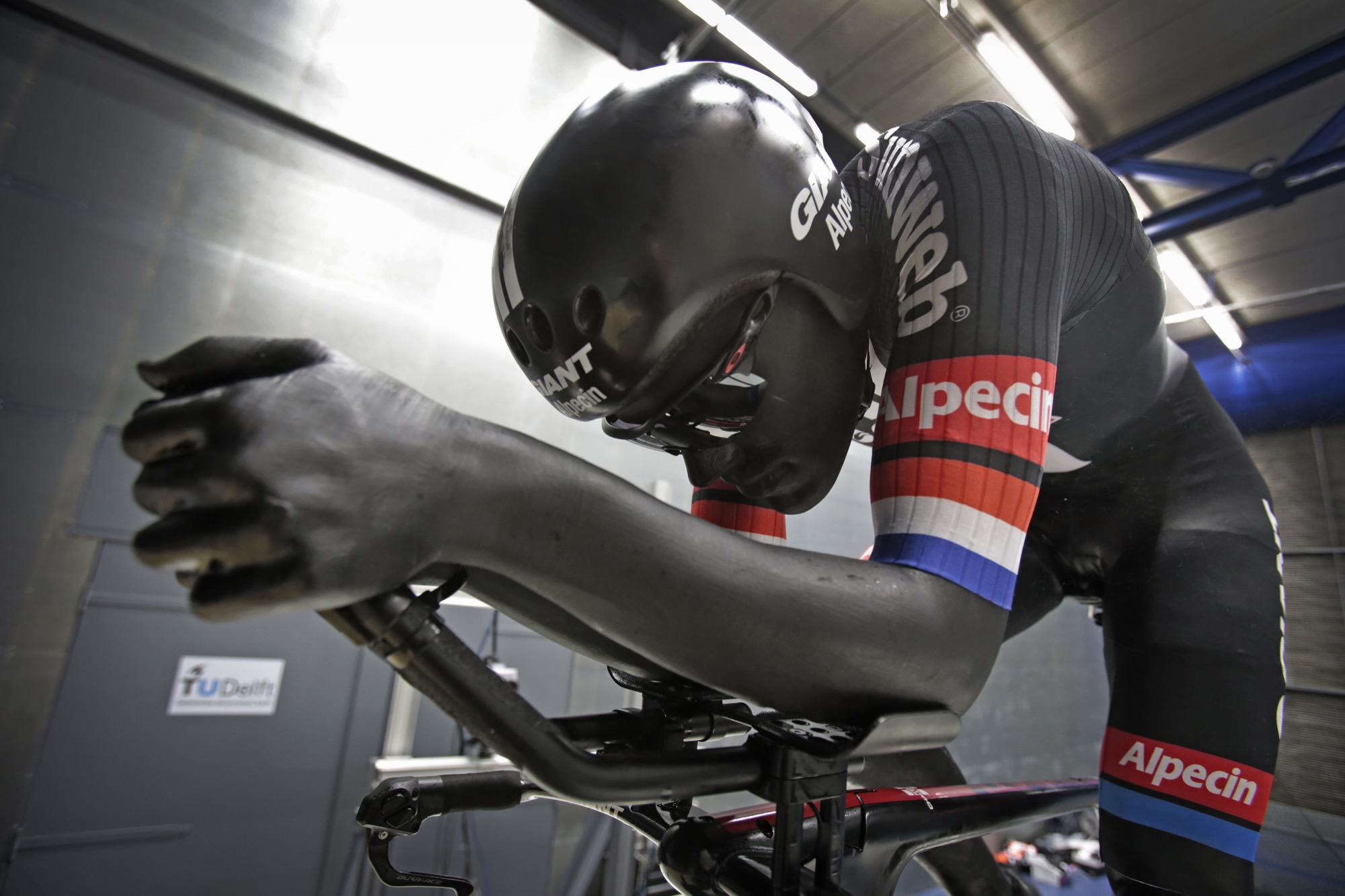 To the wind tunnel

The mannequin of Dumoulin proceeded to Wouter Terra, a PhD-student at the Faculty of Aerospace Engineering at the TU Delft. He took several measurements in the TU Delft wind tunnel, using different suits and materials. ‘One would expect a smoother fabric to induce less drag (i.e. air resistance)’, explains Terra. ‘But this isn’t always the case – especially when looking at the airflow around a rounded blunt, non-streamlined shape, like the body of a cyclist.’ Why does a ridged surface perform better in certain areas? ‘In short, it boils down to this: drag is built up out of two components; firstly: the drag through friction and secondly: the drag through pressure’, explains Terra. ‘Through the roughness of the ribbed pattern, the drag through friction will increase, but the drag through pressure can drastically drop. The net drag will then decrease. An inventive combination of rough and smooth spots on the suit might only result in a decrease in drag of half a percent, but this could potentially deliver those precious seconds that make the difference between winning or being in the top-10’, is the assessment of the PhD-student.

‘Because research has shown that the composition and structure of the fabric in a cycling suit have a significant influence on the drag, we started exploring how to improve our time trial suit’, explains Teun van Erp, scientific expert of Team Giant-Alpecin.

‘We started off by testing all available fabrics from Etxeondo (Team Giant-Alpecin’s clothing supplier) in the wind tunnel on a cylinder – the upper arm, lower leg and upper leg bare a close resemblance to this shape’, says Terra. ‘This provided us with a good insight on the fabrics we could best use for the various body parts.’ The aerodynamics experts then built several suits with the best performing fabrics, using variation in roughness and patterns, after which they were tested for drag on the Tom Dumoulin mannequin in the wind tunnel. The method used for mapping the airflows is also quite special. PIV (Particle Image Velocimetry) was used: a movement of special small particles in the airflow is analysed to get an overall view of the current. ‘To research on the scale of a cyclist, we added an innovative technique to this method; helium-filled soap bubbles were used to map the current and ensure good measurements.’ 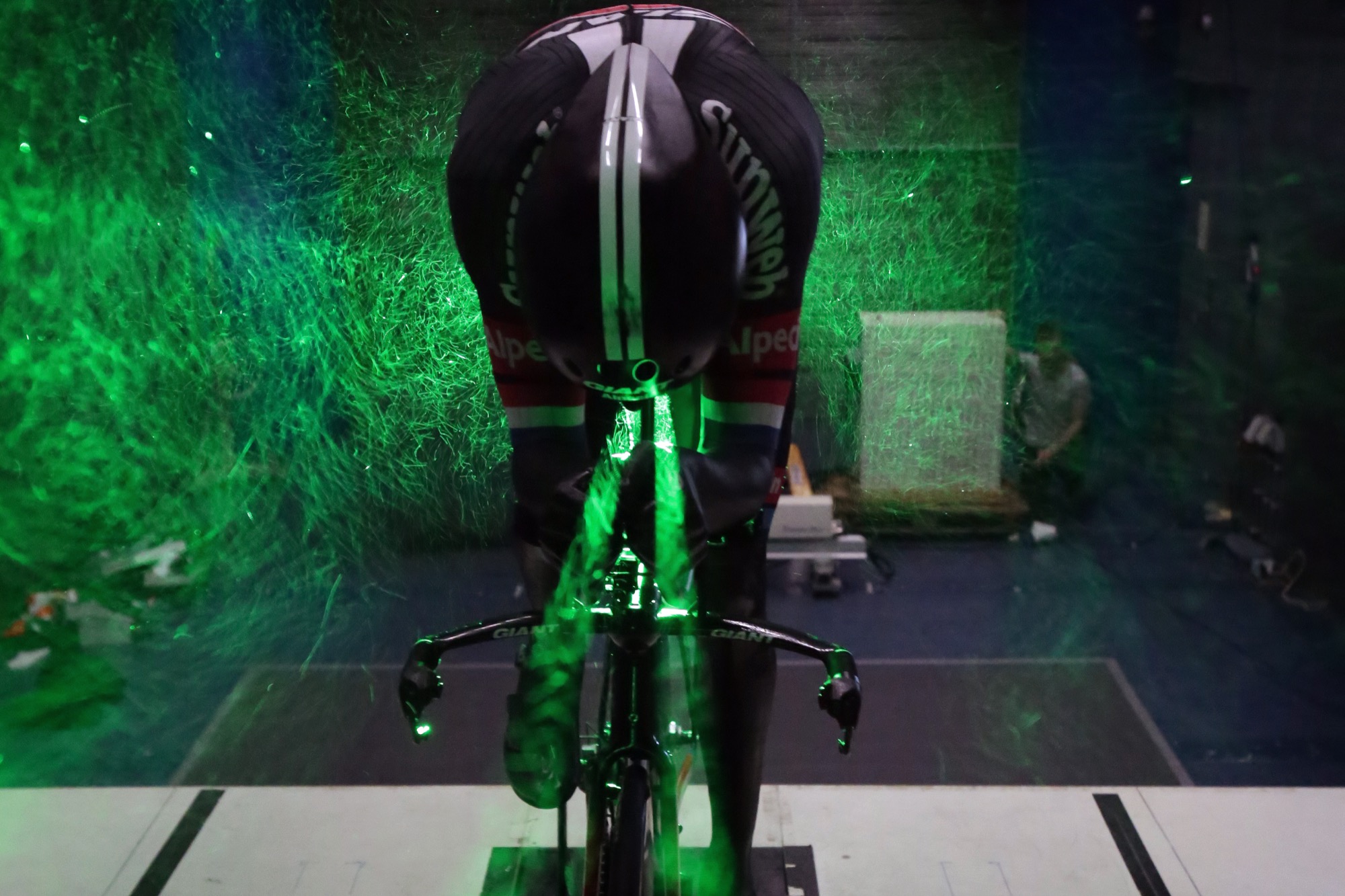 Terra expects the new time trial outfit of Tom Dumoulin, that was developed based on, amongst others, the insights from the TU Delft wind tunnel tests, to result in a time saving. ‘We measured clear difference in drag between the different materials. A difference of just one perfect in drag, to name but a number, might not seem much, but can result in a time saving of about ten seconds in a hour-long time trial.

‘On top of this, one could imagine that cycling in an improved suit can also result in a psychological effect on the athlete’, says Teun van Erp (Team Giant-Alpecin).

‘The beauty of this project lies in the interdisciplinary nature of it’, says Daan Bregman of the TU Delft Sports Engineering Institute. ‘Without all of the diverse knowledge, we would have never been able to execute it so well.’

‘We offer a lot of fundamental scientific knowledge and our aim is to apply these to sports, in many disciplines. Cycling is one of those areas. About one and a half years ago, we came into contact with the professional cycling team Team Giant-Alpecin, a team very open to increase scientific investments in the domain of cycling, to improve their performance even more.’

Team Giant-Alpecin and the TU Delft have recently announced a long-lasting collaboration. Meanwhile, this collaboration has reached four key areas, one of which is aerodynamics.

Please let us know if something is not clear:


The google group is the place to post public questions at the moment.